“We weren’t under evacuation orders. The fire was approaching from the west and the Sacramento River was between, so we weren’t panicked. Then in a flash, this guy was driving down the street with a bullhorn screaming “GET OUT!”

Video from YouTube shows the #CarrFire just before it hit the Lake Keswick Estates. You can see the ‘firenado’ beginning to swirl as wind and fire blend together.

“FIRENADO.” According to the National Weather Service, preliminary reports indicate the large fire whirl that occurred during the Carr Fire reached speeds in excess of 143 mph and was equivalent to an EF-3 tornado. Read more-–

“Terrifying,” said Nick Bender of KMBC. “The fire whirl collapsed high tension power line towers, uprooted trees and stripped trees of their bark. Maximum winds were estimated at 143 mph, which is equivalent to an EF-3 tornado.”

Sherry Lalonde of  Lake Keswick Estates in Redding said, “This ‘thing’ was at the end of our block in seconds, surprising everyone, the sound was deafening – scariest moment of my life!”

They had prepared all the items they thought were important and had them ready by the front door. They could see the fire approaching from the west, but the Sacramento River was between them and the fire.  No evacuation orders had been given, so they weren’t really worried.

Picture of their house taken from across the street by Ring.com bell – Picture courtesy of Sherry Lalonde

“All of a sudden a man rushed through the street with a bullhorn screaming “GET OUT!” The fire had breached the river a mile or two south of us and was coming up a canyon creating a 700-foot plus firenado and flanking us. It ripped out trees, picked up trucks and threw them. We had less than two minutes to escape. It surprised everyone.”

Sherry continues, “The look on the faces of the emergency personnel directing traffic was like something you’d see in a horror movie.”

The cat hid under the bed and there was no time to get him. Grabbing their dog and go-bag by the door, they had less than a minute to run. Sherry and Alan saw the immense fire tornado than 4-5 houses away at the end of their street in the now infamous July 29 #CarrFire.

“The sound was deafening as we raced to get away. It was terrifying and we are grateful to be alive and shocked that this monster,” she said on her Facebook page. “It felt like being in a Hollywood disaster movie where they get out at the last minute – very dramatic.”

They made it out in the nick of time with a fire tornado hundreds of feet high flanking them. Grateful to be alive and well, they believed the house was probably gone. The tornado was about 1,000 feet wide where it touched the ground and it burned up to 2,700 degrees Fahrenheit, according to the  San Francisco Chronicle.

Until they came back to view the damage.

The arrow points to Sherry Lalonde’s home amidst the carnage

Their home was one of the few untouched. Why would the fire discriminate and leave a few homes while taking all the others?  Coincidence?  Happenstance?  Or a miracle? 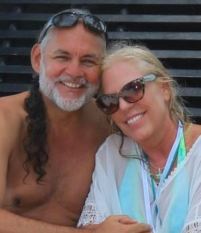 Sherry said, “I’m in shock at a miracle…all of our neighbors in Lake Keswick Estates have lost everything and we assumed we did too. Ours was one of the only homes left standing! This is bittersweet thinking of our neighbors.  Respect and love to the firefighters and sympathy for my poor neighbors.  How our home made it is a wonderful mystery. I hope to never see something like that again.”

They must replace broken windows (being blown out by the heat) and repair the smoke damage but are very thankful they still have a home in the midst of destruction all around. They are also glad they were able to save their cat.

Thank you to Sherry Lalonde for permission to share your story.

C.A. Simonson is a freelance writer and author. Her most recent book, "RUNAWAY," is a fictional account of a runaway child released in June 2019. Her award-winning short stories have appeared in seven anthologies. The Journey Home trilogy, "Love's Journey Home," "Love Looks Back," and "Love's Amazing Grace," are inspirational Christian fiction based on true events. Her nonfiction books include two anthologies, two children's speller/story coloring books and a food book of hacks, helps and hints. Copies are available in paperback, digital, and audio format on Amazon, KOBO, iTunes, Barnes and Noble, and audible.com or at casimonson.com. When she is not writing, she is quilting, crafting, or fishing.
View all posts by C.A. Simonson →
This entry was posted in Inspiration, Meditation, miracles and tagged Answers to prayer, California fires, Carr Fire, God's faithfulness, God's grace, modern miracles. Bookmark the permalink.

1 Response to Surviving the Carr Firenado

Reflections of the Heart

Self publishing advice from writing to marketing and everything in-between.

Observations from the Ozarks

Writing for Kids (While Raising Them)